The world-class musicians of the Django Festival All-Stars bring the art of the legendary gypsy jazz guitarist Django Reinhardt into the twenty-first century. Widely considered one of the greatest guitar players of all time. Reinhardt created a unique brand of driving, swinging “hot jazz” that has influenced countless artists over the decades and remains popular throughout the world. The All-Stars pay tribute to the master’s work while adding their own interpretations, arrangements, and original compositions, making for an evening of thrilling performances of stunning virtuosity.

Widely respected as one of the most dynamic live music bands in the country, with a passionately dedicated fan base that embraces their genre-bending eclecticism, THE MAVERICKS are returning to the road with an added multicultural/bilingual energy added to their musical melting pot. Soon after the GRAMMY, ACM and CMA winning band recorded their first Spanish language album 'En Español’, the unexpected COVID-19 pandemic interrupted plans to quickly bring these additional high-energy songs to the stage. But now, after a #1 chart debut, extensive best-of-the-year picks from NPR, Rolling Stone and many more, and both longtime fans and Latin music lovers new to the Mavericks embracing the album, the Miami-born, Nashville-based touring road warriors plan to integrate the highlights of these distinctive take on Latin music classics, as well as new Mavericks originals into their live set alongside many of their longtime greatest hits and Raul Malo’s penchant for unexpected, reverential covers.

The “All That’s To Come” Tour will bring to the stage the songs that mean so much to Pink Floyd fans all over the world. Replicating music from every phase of Pink Floyd’s journey, from Ummagumma to The Division Bell and all albums in between, this tour reinforces TAPFS’s dedication to the heritage of Barrett, Waters, Gilmour, Wright & Mason with a show that pays sincere and genuine tribute to those legendary Pink Floyd productions. Reproducing the state-of-the-art lighting and video, pinpoint lasers, gargantuan inflatables and flawless live sound that were the benchmark of Pink Floyd shows, TAPFS guarantees to deliver a memorable live experience. For the record, TAPFS are a phenomenon to be witnessed live… It’s almost enough to make you forget you haven’t been watching Pink Floyd, but a surrogate band.” —Prog In addition to regular concert tickets, VIP packages are available

Wanda Sykes is an Emmy-winning stand-up comic, writer, actress, and producer who has been entertaining audiences for over twenty years. She has ranked among Entertainment Weekly's “25 Funniest People in America” and her peers have called her “one of the funniest stand-up comics” in the field. In 2020, Wanda received Emmy nominations for both her role as real-life comic ‘Moms Mabley’ in The Marvelous Mrs. Maisel and for her voice work as ‘Gladys Murphy’ in Crank Yankers, a role she originated in 2004. Wanda’s guest-starring role on ABC’s Black-ish also brought her two back-to-back Emmy nominations for “Outstanding Guest Actress in a Comedy Series” in 2017 and 2018. Her fifth and latest standup special, Wanda Sykes: Not Normal, is currently streaming on Netflix and was nominated for two 2019 Primetime Emmy Awards; “Outstanding Variety, Music or Comedy Special” and “Outstanding Writing for a Variety, Music or Comedy Special.” The special also received a Broadcast Critic Award nomination. Wanda can currently be seen in Netflix’s comedy The Upshaws, which she is writing, co-show running, and starring in. The Upshaws centers on a working-class African American family in Indiana struggling to make it work and make it right without any blueprints. The show was recently picked up for a second season with 16 episodes. Season One was nominated for a People’s Choice Award and a 2022 NAACP Image Award. Sykes was also nominated for an NAACP Image Award for Supporting Actress. She recently produced and was a part of the Apple TV+ 5-part documentary series Visible; Out on Television, about how the LGBTQ movement has shaped the history of the medium. Each hour-long episode explores themes of homophobia, the evolution of the LGBTQ character, and coming out [...] 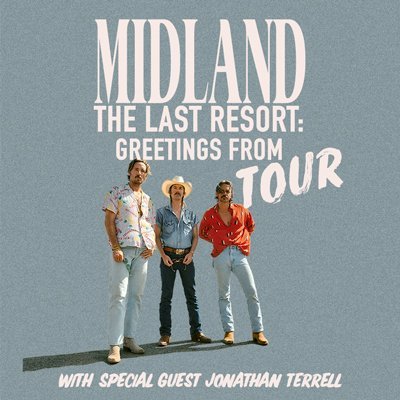 Voted Best New Group by the Academy of American Country Music Awards, the men of Midland are ground breakers and progressive traditionalists. Their music is a smooth blend of influences spanning the Western Plains, Laurel Canyon-cum Bakersfield, and Lone Star juke joints creating a country sound that resonates with music fans globally.